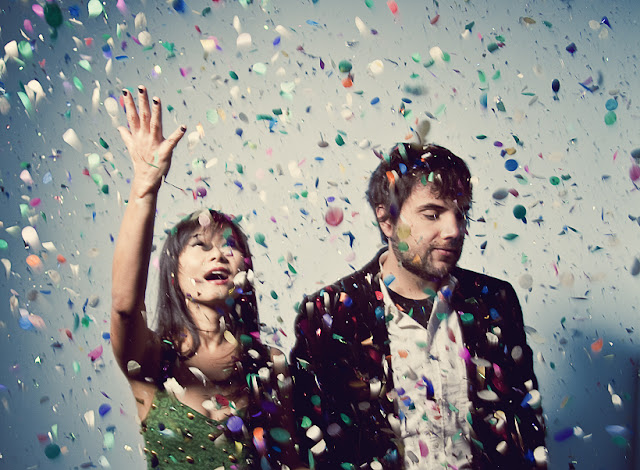 The music of New York City-based Asobi Seksu doesn’t truly fit into a single genre. You could say shoegaze, dream pop, noise pop, but really, Asobi Seksu—which means “playful sex” in Japanese—is about energy. The band’s become known for their visually powerful videos and featured songs in series like Skins and The L Word. With the release of their fifth full-length album, Fluorescence, James Hanna (vocals and guitar) and Yuki Chikudate (keyboards and vocals) are hoping to take their energy and passion further into something bigger, noisier, and dare we say, “other worldly-er”? I sat down with Chikudate during South By Southwest (SXSW) to talk about their latest album, the hectic life in the music world, and the comfort of cats.

You recently released Fluorescence. What was different in the process of creating this album versus your past work?

Chikudate: I would say the difference was we were excited to go back into recording lots of guitars again. Our intention was to make something a bit more colorful and psychedelic, so to speak. It’s really more of a headphone album, I think.

What do you get inspired by? What influences your work?

Chikudate: It’s just the fun of making sounds. That started for me at a really young age. I knew I wanted to make sound, whatever that means. I haven’t really strayed too far from that, it’s still that childish desire, I wanna make sounds.

Is there a theme you focused on for Fluorescence?

Chikudate: I think when we were writing, we realized a lot of the songs were very celebratory. We were getting back to having a lot of fun making a lot of noise. So, I think that just came together, and the word ‘fluorescence’ really seemed to embody that in a perfect way for us. And we were always trying to come up with an album title of one word, and also something that evokes a mood and also a color. Fluorescence really is not a color, but it evokes it.

What do you want listeners to feel when listening to Fluorescence? 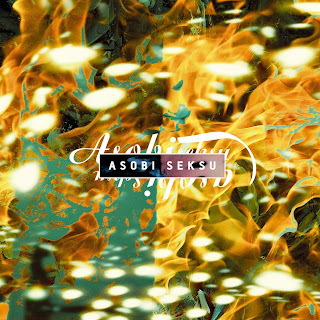 Chikudate: Well, I don’t want to say “other worldly,” but, like you’re connecting to something bigger than you.

In the process of creating the album, do you have to fit the music into the lyrics, or the lyrics into the music?

Chikudate: We usually start with music first, and sometimes we have words or lyrics lying around and they fit perfectly into our songs.

Would you say the lyrics are mostly James’ or yours?

Chikudate: I would say it’s fifty-fifty. It’s pretty collaborative. I mean, the Japanese lyrics are mine. Sometimes he doesn’t really know what I’m saying, so it’s kind of cool that they’re private for me in a way. It’s great when people do really understand, and when people sing along, it’s almost an overwhelming experience for me. Because the Japanese lyrics do feel like they’re just for me.

How is yours and James’ relationship?

Chikudate: We get along really, really well. I think with any relationship where you have to work so closely and there’s a creative collaboration, there’s going to be a little push and pull, but I think it’s a push and pull that works well. And we’re all older now, we’ve found some balance. We’re all a bit more happy, and calmer and stable. ‘cause when you’re in your twenties, it’s like, crazy and I feel like you do so much out of just willfullness and wanting to reach that goal. And then you realize there’s nothing to chase, it’s all there, and you just have to do the next thing. There’s no, I have to have this. I don’t really feel that kind of blinding, trying to force something. I just feel happy that I get to do what I’m doing. So, I think that comes with age and experience.

What’s been the biggest change since you started? The most unexpected thing?

Chikudate: I guess that it’s possible to be a grown up and be in a band. Because the image is you have to be crazy, that the only way to be in a band and be on a tour is to take lots of drugs. To drink yourself to a stupor, that’s the only way to get through. And for me that’s not the case, I find it possible to say, it’s a job and I love it. It’s a profession, and how lucky that it’s something that’s incredibly fun. And that I can do it in a way that doesn’t involve being a crazy person. Because it works for some people, and that’s fine, but for me, I spend too much of my life on the road, so I don’t want to spend 90% of my life being a maniac.

Let’s get back to Fluorescence. When listening to the album, at one point I thought, “cinematic.” Your videos seem to reflect that as well. Do you think visual is as important as the auditory when creating music?

Chikudate: For us, it’s always been really important and we’ve been really lucky in finding really cool people and inspiring people to collaborate with. Like our long-time friend Sean McCabe who did all the artwork up until Hush. And we worked with Vaughan Oliver for Fluorescence, he did the artwork for that. And we’ve been really lucky with the videos, we’ve been able to work within a very small budget and get amazing products from really creative, inspiring directors. I agree, I think we have a pretty high standard in terms of our visuals and what we put out there, so I think that we’ve been very lucky finding those people who are enthusiastic to work with us.

How does an idea become a song?

Chikudate: It’s so unglamorous. It usually starts with me behind the drums or James behind the drums, and him at the keyboard or me at the keyboard and we just see what happens. Then it slowly starts to take shape, and we argue, and it takes more shape, and it starts to look like a song and not so much a blob. And then we bring it to the rest of the band and we flush it out with them and they help us arrange it a little bit, and it becomes a more solid product. Then we take it to the studio and record it, and even then, sometimes it takes a huge shift. But more often than not, I think it’s in the preliminary stages where we have that push and pull where it really starts to take on a personality, and by the time it goes into the studio, it’s pretty much formed.

What are you listening to right now?

Chikudate: We went to the Wu Tang show (at SXSW) and that was really fun, and I enjoy washed out stuff that’s really nice to listen to in the car. I always listen to Otis Redding when I’m on tour. I’ve been going back to comfort a lot on this tour, ‘cause it’s important for me to feel good. I’ve been listening to a lot of Mary J. Blige,  and just feeling reminiscent and nostalgic in a way. When you’re stuck in a van for hours, going back to comfort is very important.

Who would you like to collaborate with in the future?

You’ve been on your North American tour for the past couple of months, how’s that going? Have you noticed different types of reception or comprehension of your music in different parts of the States?

Chikudate: We get a lot of West Coast love, I love playing West Coast shows. The audience there has always been really receptive and shown us a lot of love, especially in L.A. and San Francisco. The shows there are always really great, there’s always a great energy. And New York,  it’s our hometown, so we get a lot, a lot of love. I love playing a New York show. There’s always something really electric about it, so those are my three favorite places.

What’s been your favorite show so far this tour?

Chikudate: The one that stands out for me is probably San Francisco. And this has nothing to do with the show, actually, but because there was this cat there. The people who run the place built him a little home. He was in a little box they built for him, and they had an umbrella as well, so it was like a little vacation house for the cat. And he just kinda chilled out there the whole night, and whenever I sat next to his house, he would just jump out and sit on my lap. And that was a standout show for me, because I love cats. I’m cat deprived on tour. I’m the one who’s chasing strays down the street. Everyone’s like, “What are you doing?” and I’m just like, “They’re so cute!”

Chikudate: The album is out, so it’s lots of touring. And if we get to do that, I’m happy. I’m happy performing.

Red River Noise is a music and entertainment blogazine from Austin, Texas. Learn more. Interested in advertising with RRN or sponsoring our events? Click here.